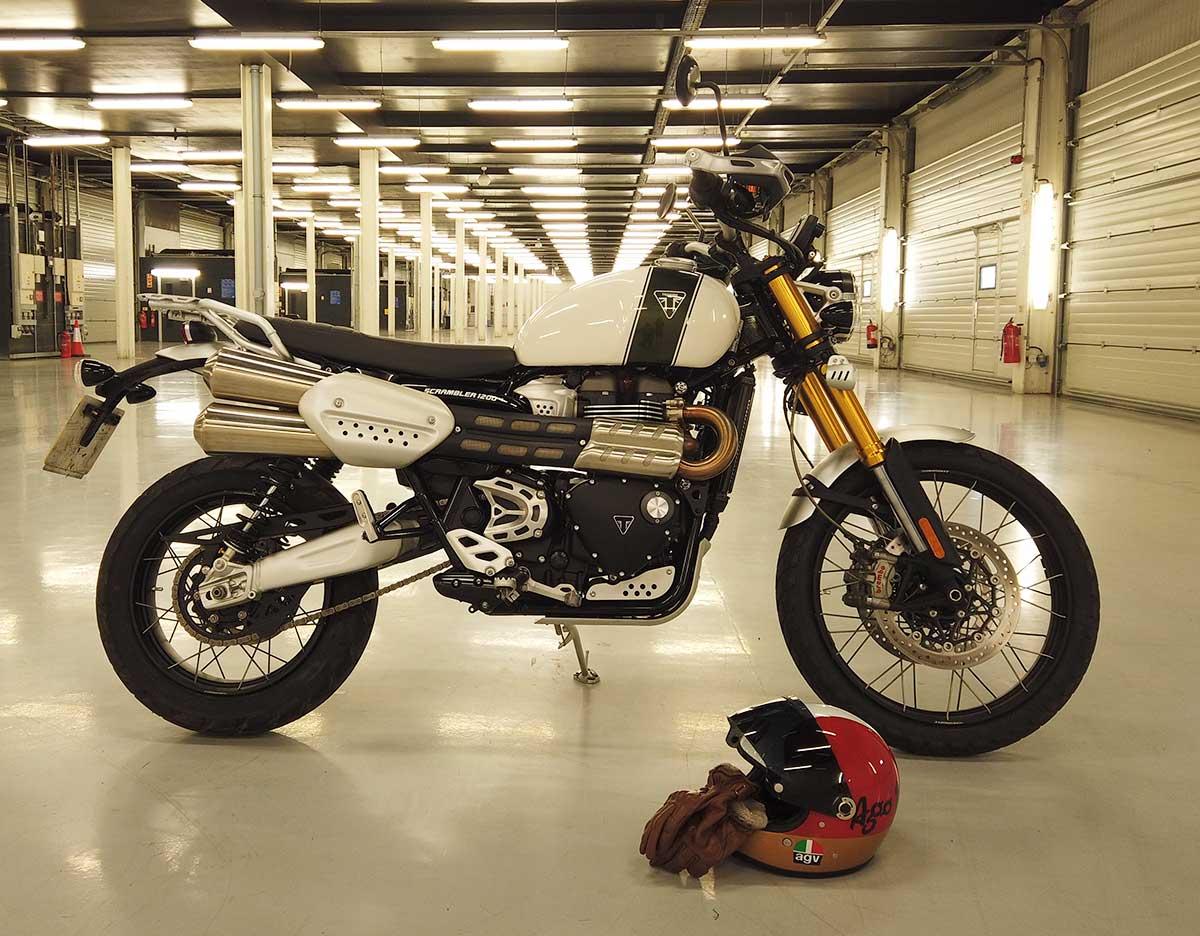 How do you assess a bike that you, literally, lived with, in it’s previous incarnation – covered 8000 miles on – often in 200 mile ‘hops’, customised, modified, cleaned, oiled, upgraded, relied on – and loved? You imagine how it would’ve been to do the same mileage on it’s new brethren – and you push on, to see if it has all the DNA that seduced you into buying it’s ancestor.

In the case of Triumph’s all-new Scrambler 1200 XE, it does – and 35% more besides. It’s a damn good motorcycle – in most every measurable metric.

My name is Steve Deeks, I am a racer, presenter, trainer, pilot – and all-round lifelong motorcycle enthusiast. In fact, though’ I race cars, it’s bikes that have always moved my spirit – and I rode before I could drive. Fortunately, I barely stopped riding – much safer in my opinion, than the ‘born again’ – but hey, so long as you ride, well that’s OK with me.

Am I ‘Triumph’? Hell, no. In the past, I have worked with Ducati, Aprilia, Buell, Suzuki, Yamaha, Alpinestars – and for several dealers – but never directly with Triumph. But I have a long relationship with the brand – having bought my own 865 Scrambler new in 2010, and because my dealer is ‘PURE’ at Wellingborough – the best motorcycle dealership in the business.

Why do I say this? Because, when I was first a customer, they, under the expert guidance of arch-enthusiast, Kevin Lington, ALWAYS went the extra mile to look after me and my bikes. In Martin, in the workshop, they have a guy who is ‘old school’ in his approach to mechanical engineering – he can actually make things and fix things, not just bolt shit on. In the modern World, where we all want to personalise our iron horses, this is both refreshing and a relief.

So, in my role as ‘road tester’, during 2019 I will be riding and writing about the whole range, seeing if they are the dream ticket Triumph want them to be. This is a pretty damn good place to start.

Under the chaos and confusion of ‘PURE’s refit, (thankfully finished in a fortnight), top sales guy ‘Dom’ gives me a better ‘hand-over’ than I’ve ever had, even when I’ve bought bikes in the past. I’ve filmed and included part of it here, because, well, this bike gets ‘rider modes’. What the … ? Yep, I’m not kidding. On the previous Scrambler, the highest tech, you got was a 12v system. Here you don’t even have to put a key in a lock. Crazy.

After figuring out the space shuttle complex launch sequence, I was off – in regular ‘road’ default mode. Dry tarmac, so all was well. Immediately I was struck by how ‘tall’ this bike felt with it’s 21 inch front wheel, but equally, how ‘chuckable’. My first marker always is: ‘can I jump straight on a new bike and crack on?’

Answer here – yep. Everyone has asked about the 21 inch wheel, does it slow down the steering … well, yes, a bit, but are you going to pitch a tall Scrambler in, like you would my slammed Harley? I doubt it. What I can tell you is that Ohlins, in any situation, is ALWAYS the best suspension that I ride on, (well, along with Ducati’s ‘Skyhook’, or whatever they call that stuff on the posh ‘Multi’ … ). It grips, turns, handles braking, road imperfections, cambers, elevations, hard acceleration – long distance – in fact, when you ride something with top quality kit, you immediately start totting up in your mind, the cost of converting your OWN bikes. Which is where the XE 1200 starts to look like really good value for money. Because this gear is EXPENSIVE – and here, it’s ‘factory sorted’, and matched to the bike. Aftermarket upgrades, could – can - leave you with an expensive mismatch that you are stuck with – ‘cause you paid so much. Be warned!

I stopped at Silverstone to pick up some new racing harnesses for the 911 SC race car – and an AIM bracket to deliver to my team at Classic Performance Engineering, Bicester Heritage. This was the Scrambler’s main job today – courier. Given that we were going to end up at an ex-RAF WW2 base, fitting. We fixed on the trusty GoPro. I hate using those things on a road bike, feel like I am tempting fate …

Silverstone to Bicester Heritage was a blast. You should visit that place when they have one of their five yearly ‘Sunday Scramble’s. I present the Goodwood Revival and Member’s Meeting – Bicester Heritage is 365 days of the year ‘working’ Goodwood, the new ‘hub’ of Classic excellence, restoration, manufacturing and support. And the UK home of my racing 911.

For four years on the bounce I presented the Goodwood Festival of Speed for AMG Mercedes Benz, and his Lordship, (Lord March, former pupil of mine, I gave him his first competition licence – therefore I claim I started the whole Goodwood ‘thing’ … ), ‘HRH’ very kindly used to let me park my bike right outside the front of the Goodwood Hotel – and leave my helmet at reception. Why? Well, it didn’t hurt that it was … a ‘period-looking’ Triumph Scrambler … #inkeeping

The bike, now in ‘Sport’ mode, was in it’s element, long, fast, sweeping British ‘A’-road, the optional led spotlights alerting traffic, (modification ‘one’ that I would make would be a noisier Arrow exhaust – absolutely essential for survival, it’s way too quiet with the standard kit on), the 270 crank ‘take’ on the Thruxton ‘R’ motor being long-legged and offbeat, almost in a Ducati sort of way, i.e. gathering pace deceptively easily and effortlessly. This power plant would leave an 865 for dead.

Comfort was good, option ‘two’, for me, would be a bikini screen, amazing what an effect they have on sustained 80-90 MPH cruising, tourers take note, but I do tend to ride quite quickly cross-country, and this bike was definitely up for that type of riding. The 865 always felt a touch ‘old man popping out for a cappuccino on a Sunday morning down by the wharf’, this one feels more like ‘I’ll just nip over to see my buddy Stef. in Brugges for a bier’ – it’s a proper motorcycle, not a fashion statement – though’ judging by the attention it generated, it’s that as well.

After dropping off the racing kit, I set course for Tureweston Aerodrome, out of where I fly fixed-wing. By now I was feeling really comfortable in the saddle, and started to work the whole package harder. Where the XE1200 excels, is punting you hard out of unwinding, tighter dual carriageway island corners – the engine map in ’Sport’ encourages you to short-shift all the while, (I was seldom using above 4000 rpm), there is such a ‘prod’ of flat, linear torque from 3200 rpm upwards, that whilst the bike is still leaned over, you can use big handfuls of roll-on throttle. Even when the road surface’s were ‘dressed’ with recently dried mud, the Ohlins and sporting rubber kept the back-end locked in, no hop, no bounce, no weave – OHLINS.

At this point, you are going to be thinking, ‘come on Steve, there must be something you don’t like about the bike?’ Yep. The dash. The dash on my 865 was the ugliest thing I have ever seen, I hated it. So ‘budget’. And it broke. This is ultra-modern TFT LCD, lots of programming, etc, relatively easy to use – but, Triumph … LOOK AT YOUR DEMOGRAPHIC – we cannot see stuff that’s written in eight-point type, therefore it’s useless. To be fair, ALL the brands do it – employ mobile phone screen designers to design their graphics. But you don’t look at a mobile phone whilst slicing down an ‘A’-road at warp factor nine, whilst its vibrating at 20Khz. Oh, wait, hold on a mo’ … Seriously though’, especially on really fast motorcycles, (like this), we HAVE to work on legibility – and MINIMUM eyes of the road time. I’m deadly serious – a modern 1200 accelerates so fast, eyes off the road time is CRITICAL. Won’t stop you enjoying the XE though’, just means that you will only check the minor characters at the stoplights. It could be customised – I ran out of time to play with it.

Other controls? First rate. Dom was telling me about the cleverly adjustable pegs, levers, etc. on his definitive ‘hand-over – walk-round’, etc. – but I was doing what all idiot customers do during a handover – dreaming of the open road, and not paying enough attention.

It’s an amazing motorcycle. I think it will do anything for you that you want; scratch, commute, tour – possibly even ‘off-road’ – though’ I wouldn’t do the latter – on any of these ‘soft-roaders’ – Triumph have better bikes for that job, and the specialist manufacturers have better bikes again.

But for someone wanting a really cool, ‘do-it-all’ retro-style ride – the XE is up there. The upgrade in engineering integrity is dramatic – featuring many ‘standard’ parts that you would normally, (take note Harley riders), pay MANY thousands for, already on this well-sorted street-scratcher. Pipes, screen, SW Motech bags – that’s all you’ll need to add on to your PCP – then you will be ready to explore the World, literally.

I get that many riders, (who are not racers), will not ride this bike as hard as I did – maybe – and IF that’s the case, buddy, you will end up with enormous reserves of everything. You will never need a bike that has any more of anything than this package offers – ever. Lucky, therefore, it’s built better than the earlier 865 – it could well be the bike you keep, it looks like it will last.

It has timeless looks too. *sigh*