Two years is a lifetime in the World of Superbikes. This is one such. Since I and she last met, she’s grown an extra 150cc, a stack of PS and torque, and now wears better jewellery than Ducati’s finest. On a Streetfighter this kind of kit would be, frankly, ridiculous. But that’s just the point; this isn’t really a ‘conventional’  Streetfighter. Sure she LOOKS like one, from a distance, but in when you get closer, there’s nothing hacked, or chopped about Triumph’s new Speed Triple RS. Yep the angry hornet look appearing in your rear view mirrors at first glance shrieks ‘bare knuckle brawler’, but throw a leg over this machine, and that melts away. What you will actually be thinking is ‘I’m not up to it’, and I’m not sure I was. It was, frankly, a lot better a ride than I am a rider. Here’s why:

Historical perspective first; in 2019, I remember taking the 1050 Speed Triple RS on a GTR gig – and loving it. Bonkers fast, but with the manners of an Eton Rifle. Beautifully equipped, I remember the bike, laden with all of my kit bungeed on, HATING the 40MPH contraflows with a passion, and me being bored and uncomfortable with no wind blast on my chest. But I also remember thinking the surplus of EVERYTHING made the 1050 Speed Triple RS safe in a way that it’s data would suggest not. In short, she was uber competent. I thought it was frickin’ brilliant, looking back on, and re-reading my test bears that out. I do remember saying in the little video that I was glad to give her back  - whilst I still had a valid licence. 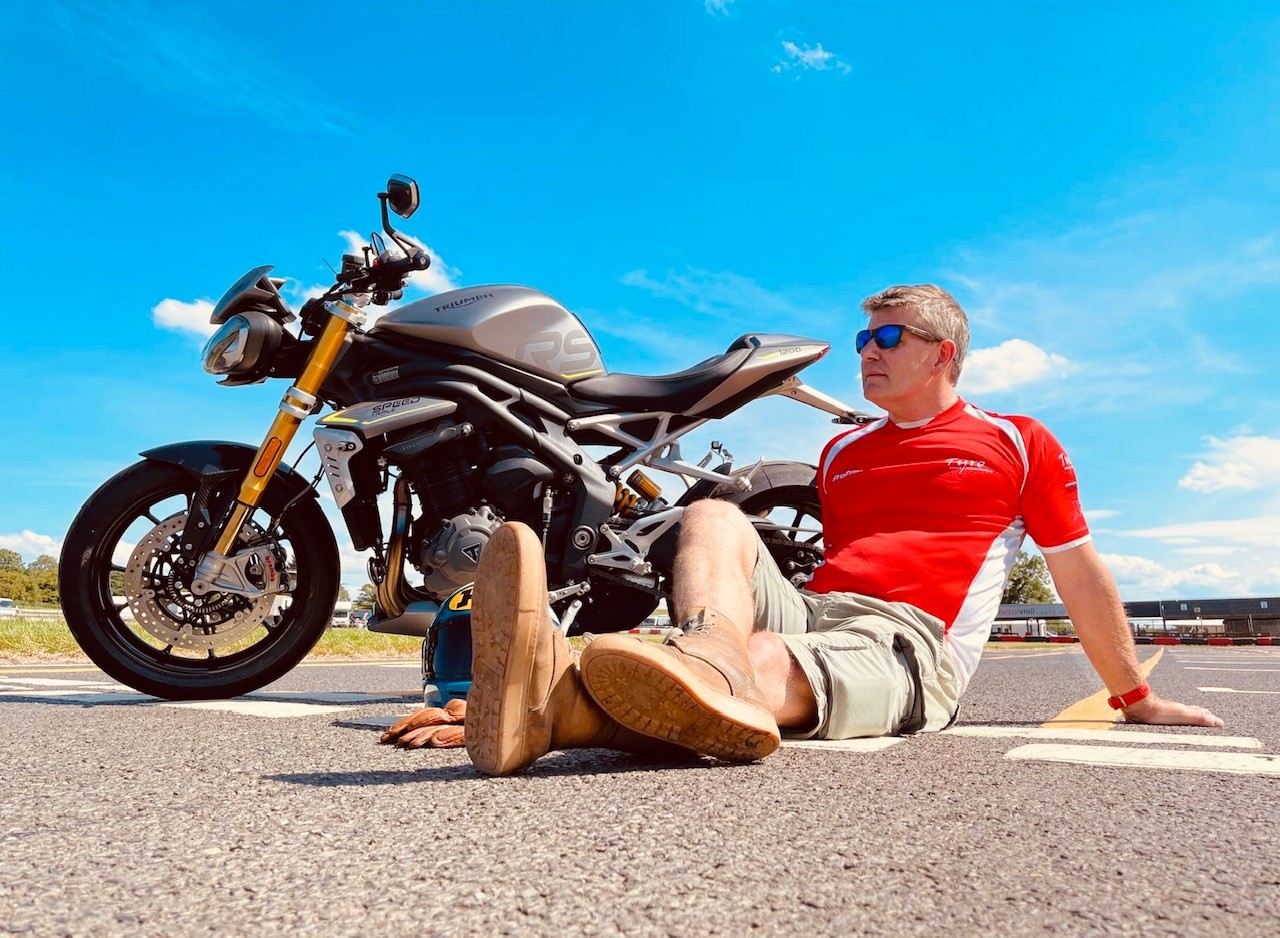 Roll forward to post-apocalyptic 2021 Britain, and I feel different about the all-new 1200. I remember the 24 hours I spent with her being a frenzy of, (sublimely), controlled aggression, feeling like I’d jumped on an Ascot flat racer that had, for some reason gone insane – with me hanging on for grim death. After studying the Triumph website, I now understand why the horse gone crazy – Triumph’s quartermasters have equipped her with the goods to get the job done – in every department. Except, perhaps, the department badged ‘comfort’.

In short - the  2021 Speed Triple RS is a gangster, a thug – of that, there can be no question. The word ‘brutal’ sprang to mind numerous times. Case in point a beautiful early morning start, and I’m heading North to spend the day at Whilton Mill Kart Track coaching one of my proteges. It’s 7.30AM and I’m zipping down the A46, dispatching cars at a ridiculous and contemptuous rate of knots, trying to mind my own business, and remain anonymous, and failing absolutely. This is not a ‘stealth’ motorcycle. As I head out of Coventry, scything through Ryton, I’ve left the traffic SO far behind leaving the island, I think ‘let’s see what these brakes can deliver’ – like you do. Crass mistake. Bang – almost before I’ve had time to re-consider my stupidity, the WASP grinds my crown jewels into the finely crafted fuel tank – with all the subtlety of a twelve gauge. It’s a good trick – if it wasn’t my nuts in the cracker. The RS will, on warm tarmac, outbreak anything this side of a GTR. And in a savage manner too. It’s not just the Radial Brembo’s – or the massive Ohlins forks – or even the track sticky Metz. RR’s – it’s the way Triumph stitch it all together in this assassins toolkit of a bike. It stops harder than any road bike I have ever ridden – and all but a handful of race bikes too. It’s insane for the highway, well, maybe not, if it stops you imbedding the thing in the side of an Evoke …

Here’s the elephant in the room for me; how could you use this bike WITHOUT a screen of some sort?

And, if you faired it, it would be a Panigale. Or, something more focussed … 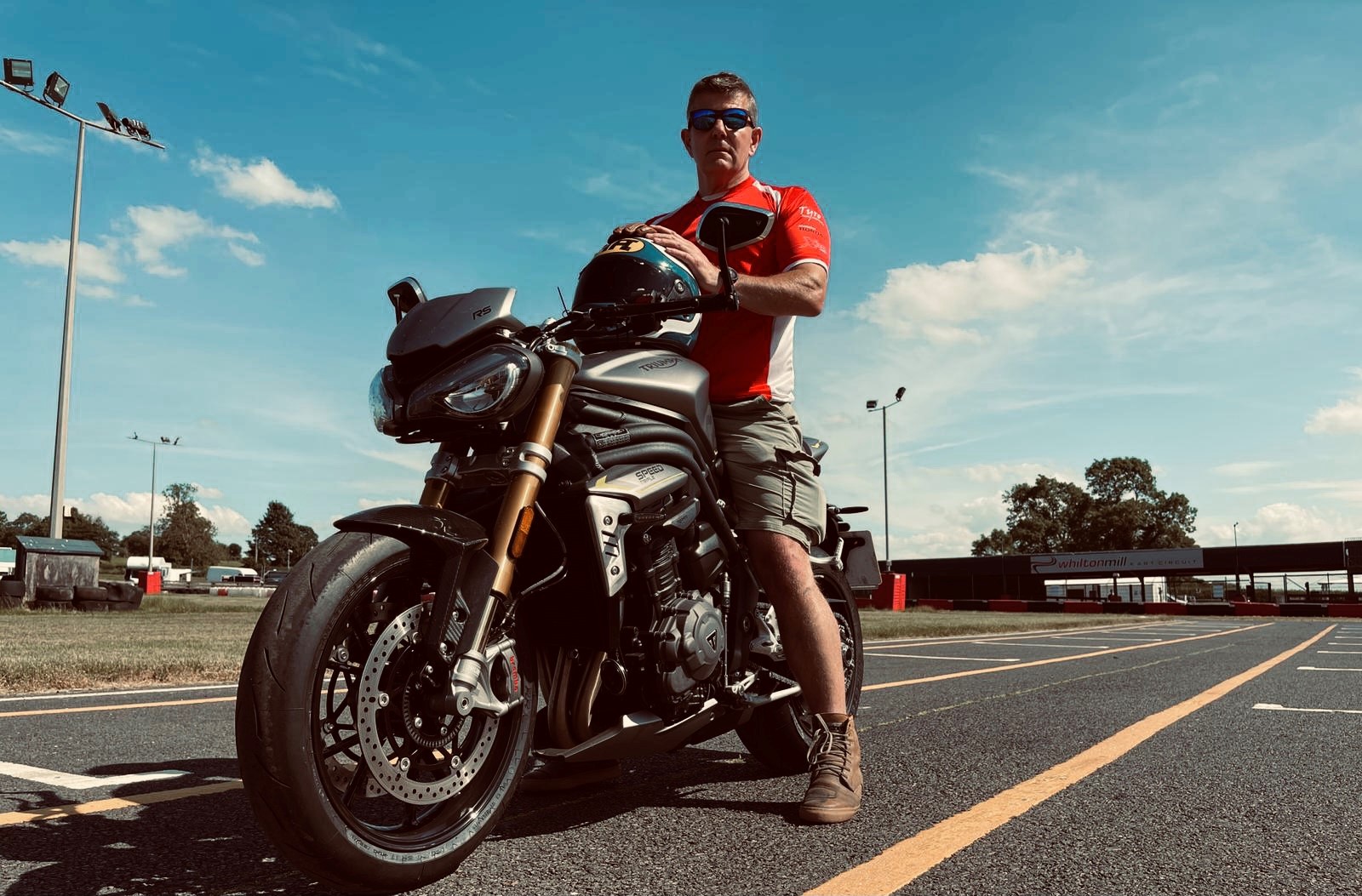 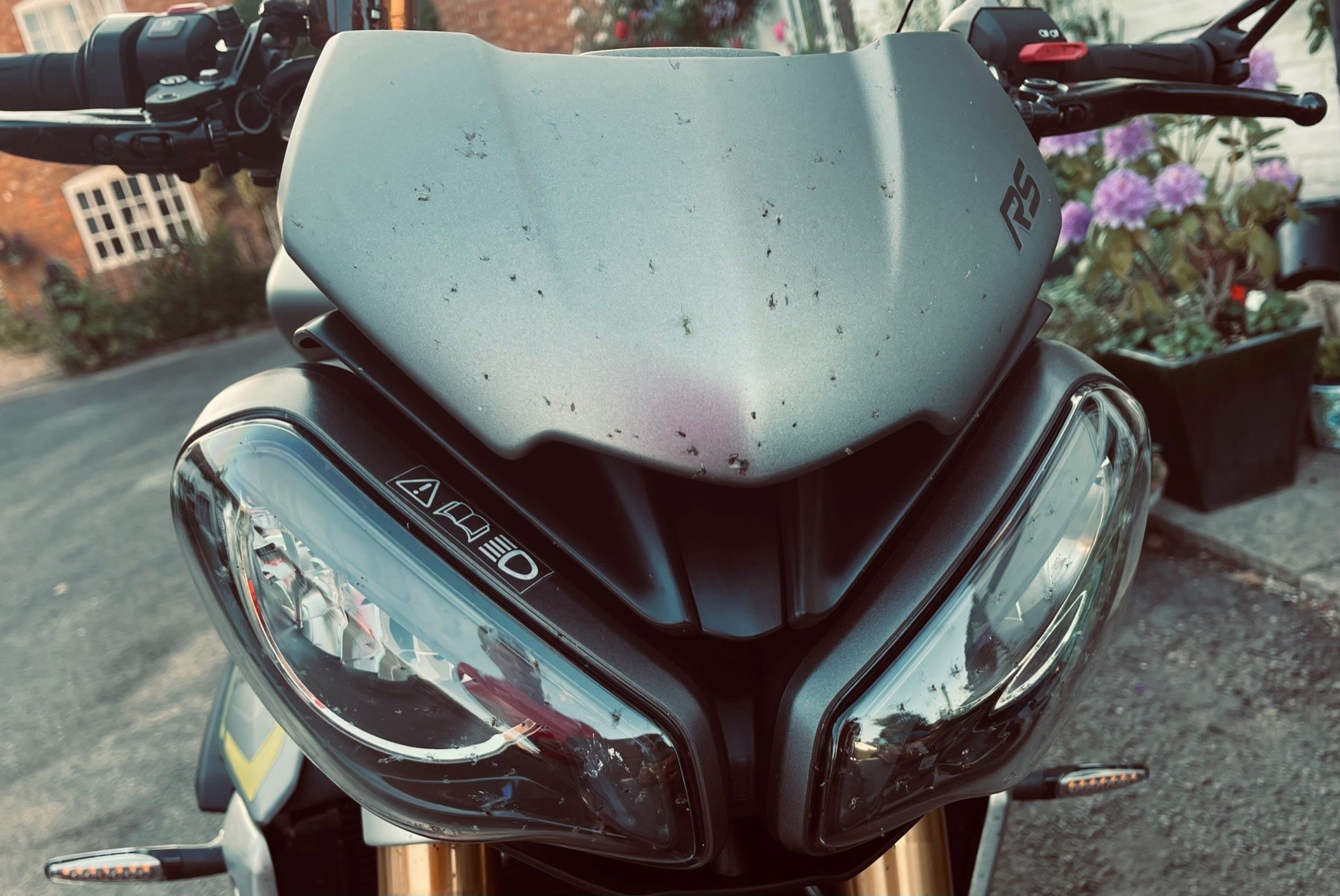 Perhaps it’s just me, but a bike that accelerates this fast to 100MPH is going to spend a lot of its life at, or above this figure. For legal reasons, let’s pretend it’s on a track … so it needs to work at this figure, and, unfaired, it just doesn’t. Your first purchase will be, at least, a flyscreen. Or maybe I am just old, (don’t answer …), but naked, the WASP even made my ELBOWS hurt. No bike has ever made my naked elbows hurt before, but this one did. The 100MPH wind blast made them sting. Yes, OK, I know, I should’ve been wearing a jacket.

Riding position feels more ass-up, head-down wristy than it’s 1050 2019 incarnation – the seat came too tall for me, given more time I would’ve undoubtedly lowered and softened everything. I will ride this one again, no question, for a second assessment. The adjustability of this thoroughbred was simply outside the scope of my 24hr jail break, time was short and I focused on getting where I needed to go – pretty much as fast as I dared. This is not a sustainable strategy, and I knew it at the time. But excellent fun, none the less.

The engine is a monster – really. Idling along at 90MPH it sounds busy in an off-the-cam, off-the-pipe, lean-fuel map kind of way – but twist her open, and at a certain point – maybe 7500 rpm – things start to go ape-shit, feral – and she howls in a visceral frenzy of noise. Why don’t I know the exact RPM … ? Because I wanted to LIVE, you will NOT be looking at the rev-counter when she hits the powerband, I promise you …

On the standard pipe, (they don’t even make – or need to make - an Arrow for this one), WASP starts to suck in air so fast you can feel it going supersonic. I couldn’t tell whether it was the intake or exhaust that dominated the soundscape. Combined they sound epic, I have no idea what kind of rpm I was using, because by then there was no line on the horizon, and I daren’t take my eyes of the the tunnel of light ahead. How real world fast is she? I came off the A46 island towards Stratford upon Avon on the homeward leg, and ahead of me was a new Carrera 4S Targa. The women behind the wheel, rather than pulling to the left to let me by, opened the taps. So did I. The Speed Triple kept trying to shovel her out of the way – up to 140MPH – after which I aborted the mission. It’s seriously quick. Gearshift is near perfect, standard Triumph actually, clutch is light, controls are well spaced and ergonomically perfect. Frankly it wouldn’t have mattered WHAT was on the LCD dash – you’re not going to be looking anywhere but the road – if you want to live, that is. 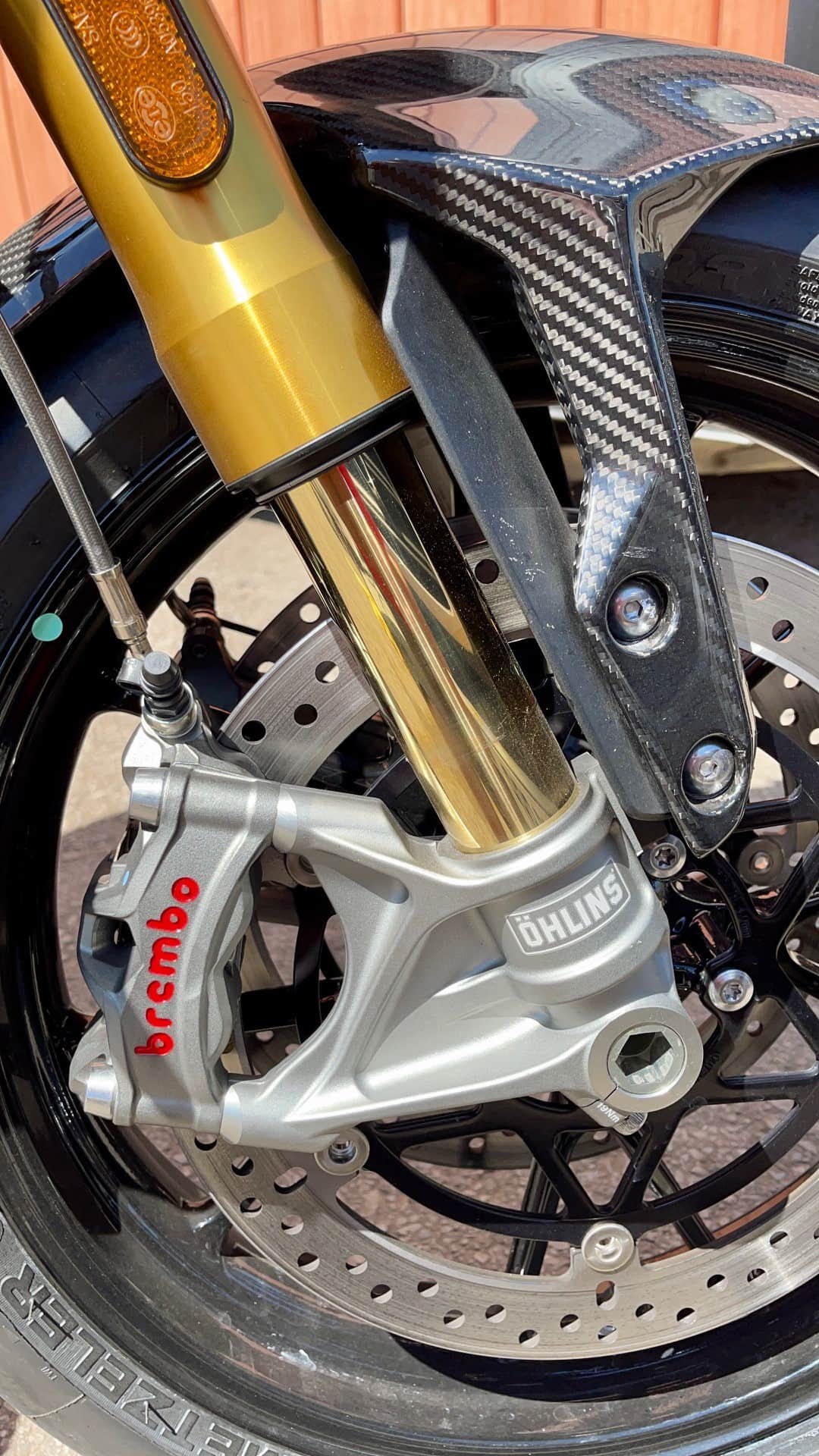 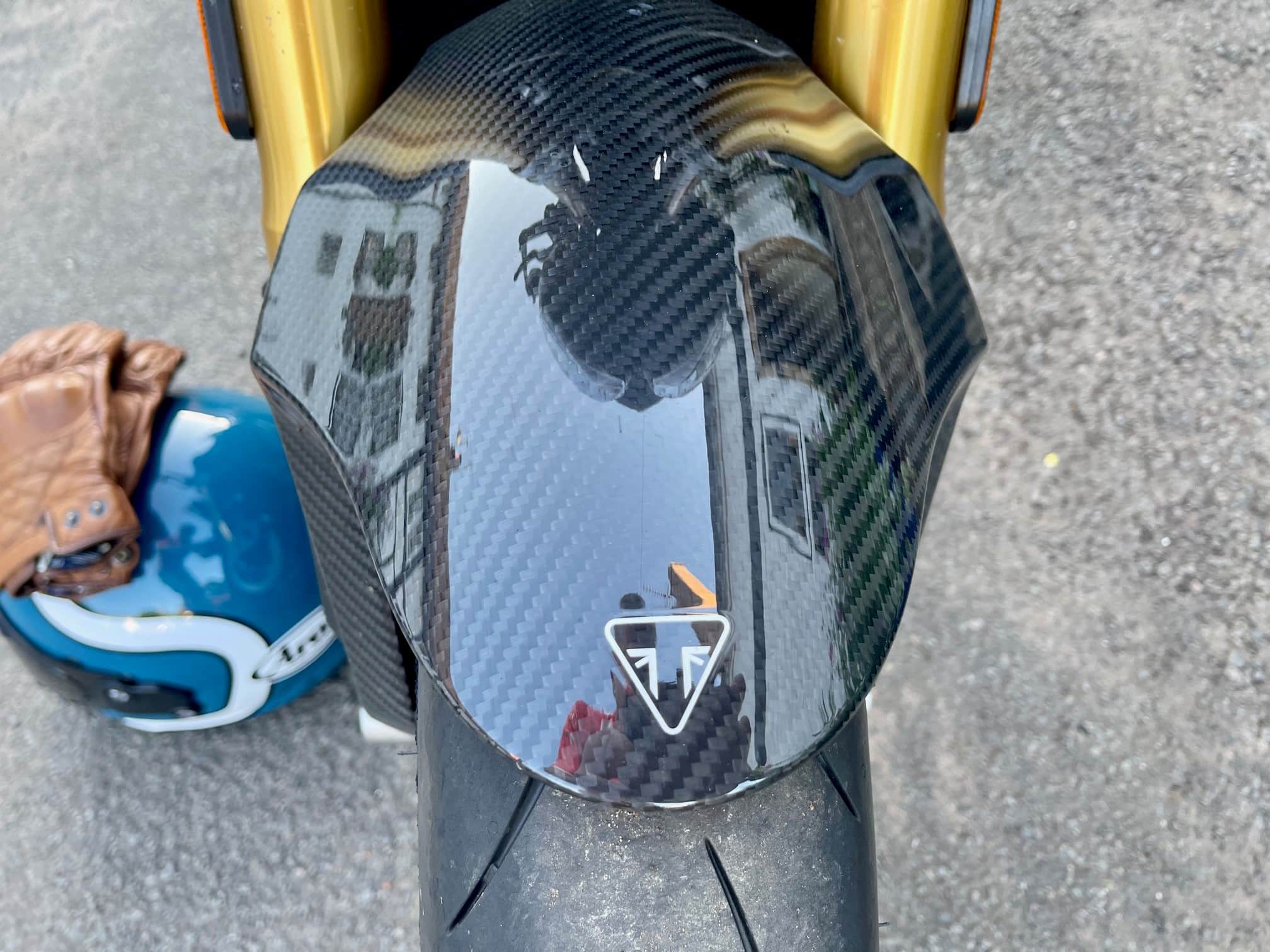 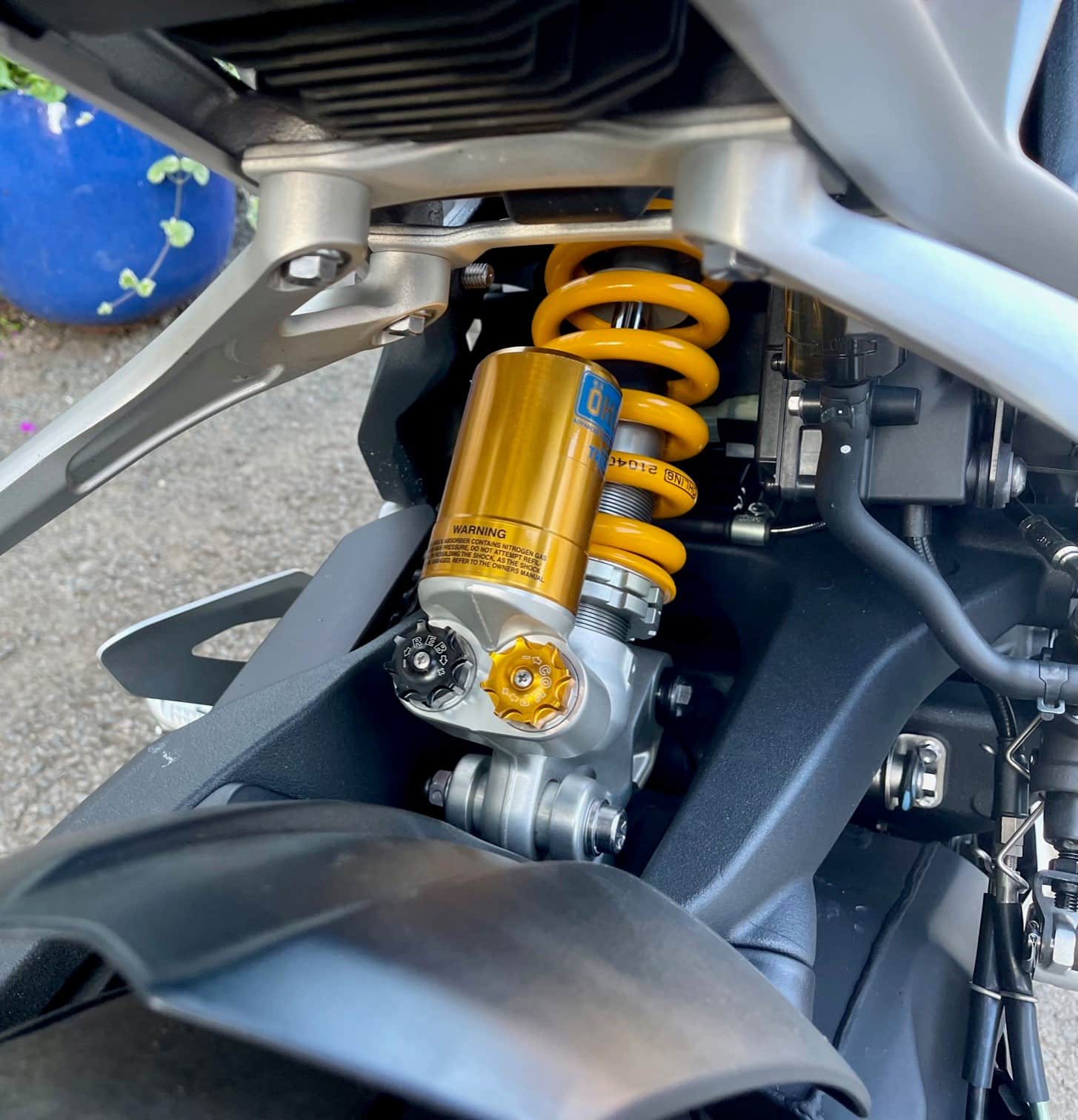 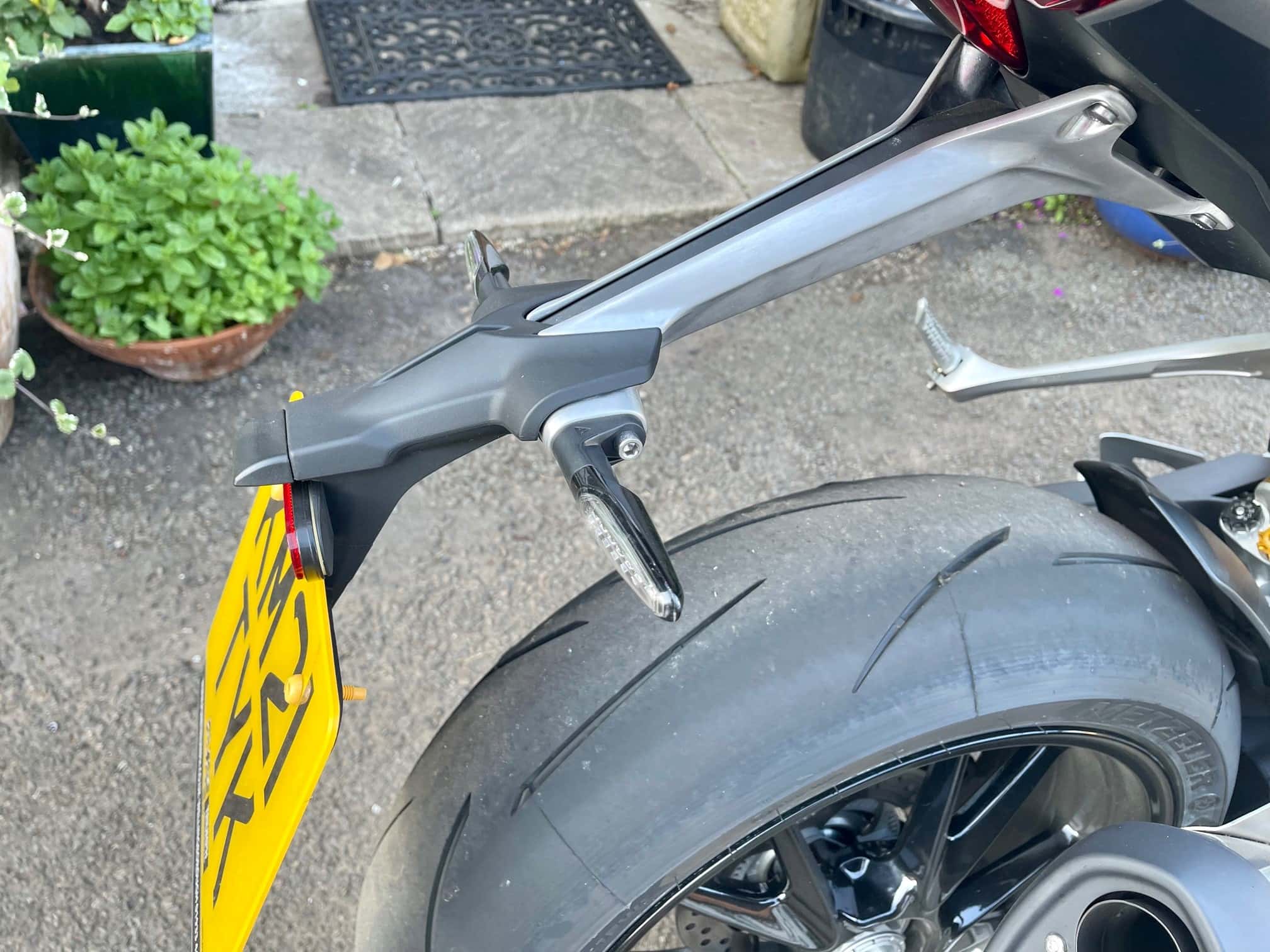 For perspective, the 1979 911 Carrera SC that I am racing this year had, as standard from Porsche, 180 PS. The Speed Triple RS has 180 PS. The Porsche weighs SIX times as much. Let that sink in for a moment …

How much quicker is the 2021 compared to the 2019 I tested. A big chunk. Maybe 25%. How much BETTER a motorcycle? That’s a completely different question. For me, it isn’t. It’s actually too focused. I’m simply too old. Cards on the table. And I’m not good enough. It’s a naked TT ride. For the right rider I imagine it is nirvana, the bike they sketched in the drawing office of their dreams. I’ve agreed to re-vist the RS for a second evaluation, maybe get to spend a little more time with her. See how I feel then. Issue I have is, I’ve ridden the Rocket3 R, granted, it’s a lot more money – and a different kind of motorcycle - but in this case I would find the extra money. Re-read my test, I adored the big banger. Less PS – 167 vs 180, easy to ride fast, also a rebel ride – but more laughs. And I think a bike should make you laugh out loud.

This one made my eyes water.